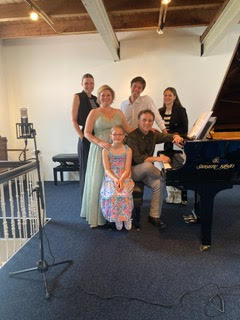 We had a very successful first ever International Outreach Concert with American Songbook Association (New York) in Leiden, the Netherlands. I hosted, sang and co-produced (with ASA)  the event gathering special guests, students of mine  and local children to shine. And they did just that:  Feline Plomp, Ming Lie, & Emma van Eek as child soloists, superstar Gerlinde Vliegenhart and myself sang For Good from Wicked and the local children came on stage and everyone, including the public, joined in on True Colors. Flash mob style. Brilliant Singer/Composer, Emma Brown, was there and also joined us in the finale. The incredible Michael Roberts, President of ASA, was the musical director and he played sublimely and declared publicly his love for the Netherlands.  The event was described as ” a warm bath of musical love”.  It had a theme of  belonging,  rainbows and coming home. A very special Thanks to Yung Lie for his help with production, Emile van Leenen Piano’s for the beautiful space and the ASA for the collaboration.  More about American Songbook Association and their outreach program here.

The evening of the 28th I  received a call to come back to Michigan as my dear mother was in the hospital and would not make it.  She was supposed to be released from appendix surgery that day but her body decided otherwise.   We made it to  the hospital August 29th and a few short hours after we arrived we were able to say goodbye with her whole family around her.

It had been storming that day and in the last moments of her life a doublewide rainbow appeared outside her window going straight up to the sky.    The day before in the concert I had sung Somewhere Over The Rainbow and it seemed only fitting to do so at her funeral. Here is a photo from her window. 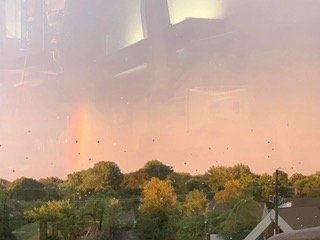 We noticed the cross form the reflection in her room. Rest In Peace, Mama.  I do believe the heavens opened up that day.

I stayed in Michigan with my family a few weeks and flew back to the Netherlands to perform on 16 September at the International Military Taptoe In Gouda, Celebrating 750 Years of Gouda.
There I performed several numbers with the Band Of Liberation and Pipes. In the finale all the band and acts joined together.  One of my solos in the finale was Amazing Grace. It was a beautiful autumn evening and just as I started to sing it, it began to rain. The last time I sang that song was at my mother’s funeral two weeks prior.  It was very healing and really powerful to sing with all the bands and their beautiful sounds. 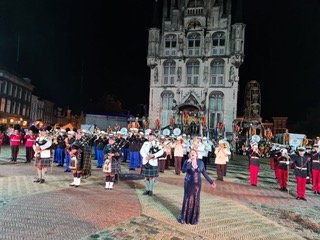 On another personal note, if I may:  My love and I are continuing training for our Mount Kilimanjaro climb in Africa in November 2022.   The weekend after the concert we walked over 40 km in the rain and guess what we got to see alot of? You guessed it:  rainbows, rainbows, rainbows. 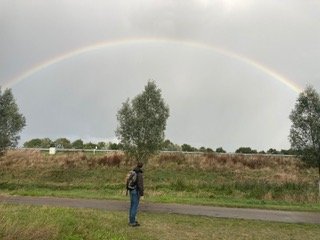